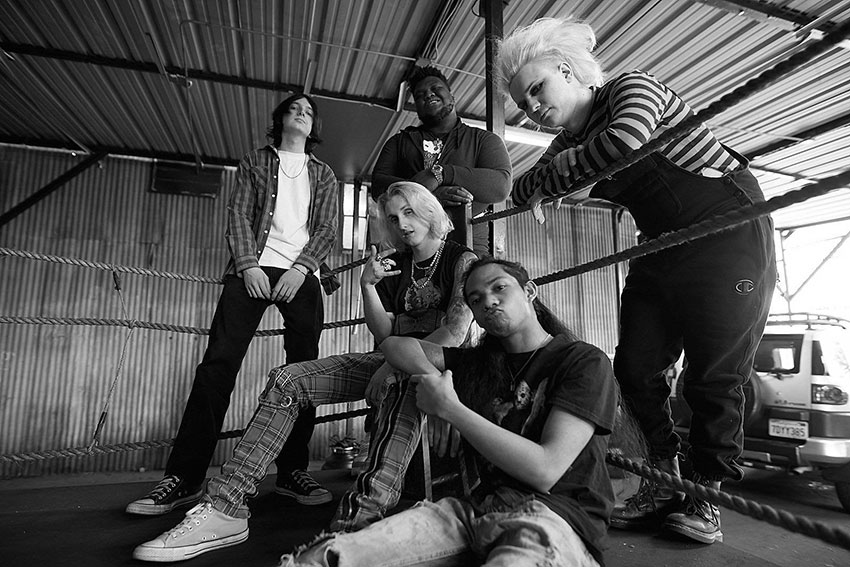 As a special treat, we have “HEI$t” available for streaming in its complete official music video form ahead of tomorrow’s official drop — check out the clip below. The music video was shot during COVID-19 lockdown, and since the band and their special guests couldn’t get together to shoot said video, they ended up shipping a GoPro camera around the country, obtaining footage that would eventually be woven together by editor Taylor Lamb (Tech N9ne, Maez301, Stevie Stone, etc.).

“’HEI$t’ is a bit of a departure for Love Ghost,” states lead vocalist/guitarist Finnegan Bell. “The song started from a beat which our producer Mike Summer’s created, then we added live instruments. I thought of Lucy Loone immediately as a feature on the track. She’s an underground pop queen and her sensibilities seemed perfect to me. She’s a very brave artist and her vibe is perfect! I always wanted this song to have three artists on the track, so we reached out to Cameron Azi, a trap-metal artist. Cameron is someone I have been listening to since high school. Both Cameron and Lucy have been amazing collaborators.”

Finnegan adds, “For the music video, we decided on the idea of shipping a GoPro around the country and each person filming themselves. They each added their own creativity, which was dope.”

“We’re meshing those two sides,” elaborates Finnegan. “It’s not too urban for the suburban kids, and it’s not too suburban for the urban kids. We’re uniting the rap and rock worlds in our own way, adding guitars to hip-hop, bringing beats to rock, and blurring the lines. It materializes between different genres.”

If you were to combine Nirvana, Alice in Chains, The Smashing Pumpkins, My Chemical Romance, Juice WRLD, XXXTentacion, Lil Peep, City Morgue, and $uicideboy$ into a melting pot, the outcome would undoubtedly result in Love Ghost.