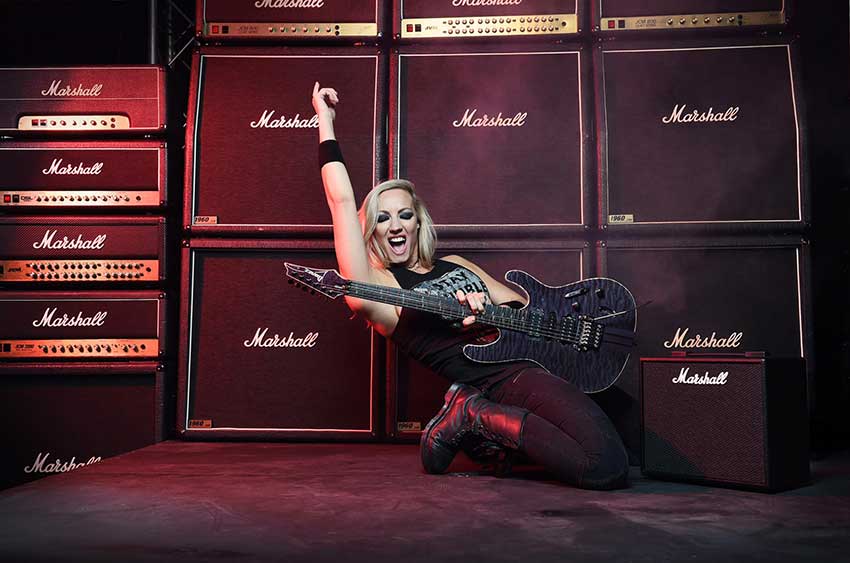 Los Angeles born superstar guitarist, Nita Strauss, one of the most sought after and respected musicians in the world, has launched Rock Guitar Fundamentals – a 3 module online guitar teaching program suitable for learners of all levels. The course is available at www.iwanttoplayguitar.com and for a limited time, Nita is offering fans a 50% discount. No code required.

Rock Guitar Fundamentals is an online teaching program developed by Nita with a simple goal – getting guitars in as many people’s hands as possible and helping to improve their playing. Nita developed a 3 module system where aspiring learners can jump in wherever their skill level is, from picking up the guitar for the very first time to advanced players who want to brush up on music theory or learn some shred tips and tricks.

Module One is designed for the brand new player and goes over the anatomy of the guitar and all the basics like how to hold the pick correctly, fret the notes, tuning and more.

Module Two is highly focused on technique and theory, approached from a rock player’s perspective to be very easily understandable for the modern musician.

Module Three is where you start to find the bells and whistles of sweep picking, legato, whammy bar tricks, and more.

Nita says of the course

“I see so many people online saying they want to play guitar, but have no idea where to start. And many more experienced players that get frustrated by technique and theory! So I wanted to create a step by step course that explains everything clearly from a rock guitar player’s perspective. If you’ve never picked up a guitar before and you start this course from the beginning, as long as you’re willing to put in the time you’ll end up with a great knowledge base to play solos, write songs, and play on stage with a band!”

* D’Addario & Co released a special tool kit designed by Nita and named the “Hurricane Kit” – a gigging guitarist’s emergency kit with every tool you might need at a moment’s notice.

* Levy’s straps released a Nita signature design guitar strap, a black and gold strap with a baroque filigree pattern. They also released a similar design in the colors of the Australian flag to benefit koalas affected by the bushfires in Australia.

Nita has also been busy writing and recording for the follow up to her enormously successful debut album, ‘Controlled Chaos’ which came out on Sumerian Records in November of 2018. Watch this space for more news on that in the coming months.