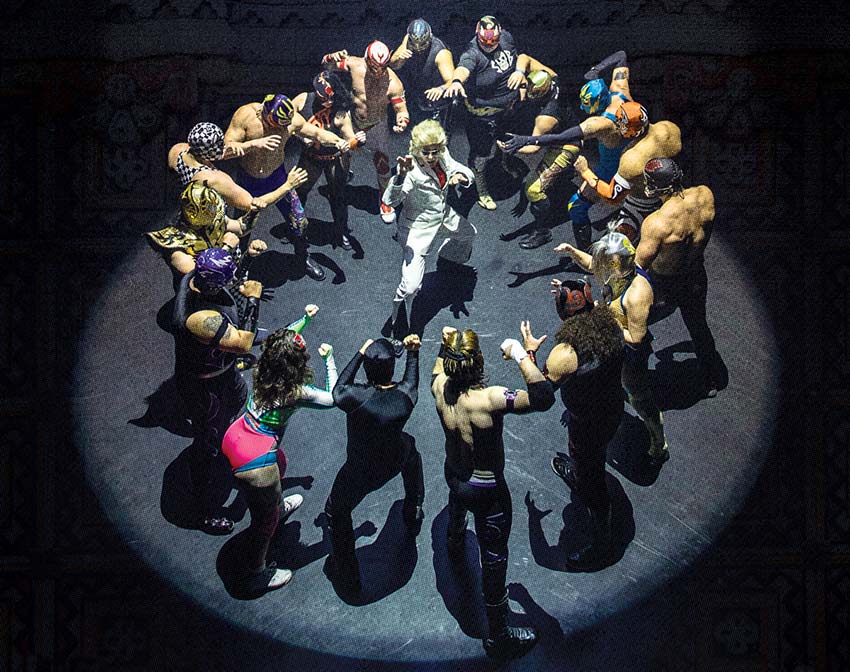 Maynard James Keenan strikes again with his second livestream concert, ‘Billy D and The Hall of Feathered Serpents featuring Money $hot by Puscifer,’ and, with a title like that, you know you’re set up for a good time.

Taking notes and expanding on the idea of his first livestream experience, ‘Existential Reckoning: Live at Arcosanti,’ this performance just goes to show you how much further the spectrum ranges. Maynard has always been extremely cutting-edge and artistic through the many years on stage. These livestreams enable the viewer to get inside his hall of heads and see the visual canvases he’s been trying to paint all these years. This really seems to only be the beginning for what’s to come.

The band took stage in the historic Mayan Theatre located in Los Angeles. It’s a 1920s revivalist theater with original artwork by Mexican painter and sculptor Francisco Cornejo. At some point they even featured a 14-foot wrestling ring, and Luchadores, yes, Luchadores. But then again, if you know Puscifer that really isn’t too surprising.

They bodyslam the album ‘Money $hot’ from top to bottom with little interstitial videos between them. Featuring two lovely ‘bartesians,’ Jacob Vargas and Clifton Collins Jr., making specialty cocktails and naming them after the titles of the upcoming tracks.

Billy D (played by Maynard) delivers a composed and logical monologue touching on present day humans. About how technology has been a downfall to curiosity. Words that really stood out to me was when he said, “problem-solving skills have actually diminished with the advent of technology and our ubiquitous modern conveniences.”

I love the band that is Puscifer. Every aspect is perfect. The production was awesome and the way they performed the album was refreshing. Can’t wait for it to come out for purchase, if that happens. While watching the show, I instantly fell in love with singer Claire Acey, woah, great voice, super pretty, she – sorry, I’ll stop. Gunnar Olsen slammed the drums perfectly every time. He’s like an extremely calculated and timed robot. The whole band, Maynard, Mat Mitchell, Carina Round, Greg Edwards, Gunnar Olsen, Juliette Commagere and Claire Acey, really brought together a magical experience.

The show plays for 72 hours starting on April 17th. If you missed it, I’m sure they will be releasing it at a later date. I highly recommend checking it out. Great show, great album, great performance, great visuals, great, great, great. One last thing, Maynard, what a voice. Wow. His voice should be turned into an NFT. It’s precious.

Go to pusciferlive.com for more info, see below for a pair of teaser trailers and the recently released video for “Bullet Train to Iowa.”