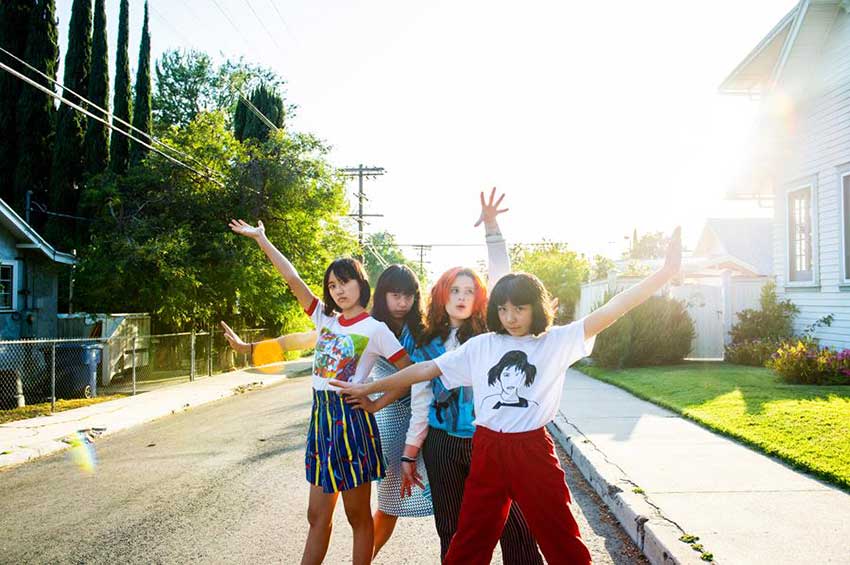 Epitaph Records is thrilled to announce the signing of The Linda Lindas. The label approached the Los Angeles-based, all-female punk band behind the viral smash hit “Racist, Sexist Boy” [embedded at the end of this post] several months prior to their now-legendary set at the L.A. Public Library. With their explosive and authentic collision of garage-punk, power-pop, and new wave, The Linda Lindas are an exciting new addition to the Epitaph roster.

“Epitaph offered us full creative control and they’re really supportive of what we want to do as a band,” says Linda Lindas vocalist/guitarist Lucia, age 14. “We’re really happy about signing with them, and we can’t wait to put out more music.”

Founded in 2018, The Linda Lindas also include Lucia’s 10-year-old sister Mila (vocals, drums), their 13-year-old cousin Eloise (vocals, bass), and longtime friend 16-year-old Bela (vocals, guitar). They first played together when former Dum Dum Girls frontwoman Kristin Kontrol invited them to take the stage to play covers for Girlschool LA (a music and ideas festival focused on connecting and empowering women-identified artists, leaders, and voices). After forming their own band and playing DIY gigs around Los Angeles, they were asked to open for punk icon Alice Bag and for seminal riot grrrl band Bikini Kill at one of their 2019 reunion shows at the Hollywood Palladium. In time, the band began writing their own material, including a song featured in the 2020 Netflix documentary ‘The Claudia Kishi Club.’

In December 2020, The Linda Lindas released their self-titled, self-released debut EP showcasing their high-energy and heartfelt brand of punk, naming Jawbreaker, The Go-Go’s, and The Alley Cats among their inspirations. Months later, they appeared in a key scene of Amy Poehler’s ‘Moxie!’

On May 4, 2021, The Linda Lindas’ set at the Cypress Park branch of the L.A. Public Library was streamed as an AAPI Heritage Month event (the band members are Asian American, Latinx, or both). The highlight of their 40-minute set: a blistering performance of “Racist, Sexist Boy.” In addition to amassing over four million views on Instagram, the clip has earned major praise from the likes of Hayley Williams, Questlove, Flea, and members of Rage Against the Machine and Sonic Youth.

“We knew the song would get a good reaction, but we never imagined this,” says Eloise. “Even though we started the band for fun, now it feels we can actually make a difference with what we’re doing.”

Currently, at work on new music, The Linda Lindas will make their national television debut on Thursday, June 3, on “Jimmy Kimmel Live!” at 11:35pm/10:35pm CT on ABC.