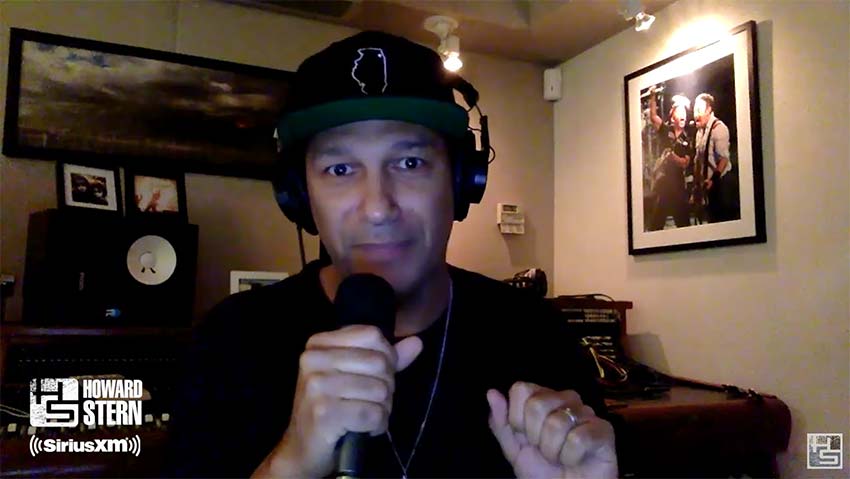 Throughout his conversation with Howard Stern and co-host Robin Quivers about everything from his very nearly unique backstory and multi-faceted career as a founding member of acts like Rage Against the Machine, Audioslave, Prophets of Rage, and the Nightwatchmen to side jobs ranging from exotic dancer in Hollywood to touring guitarist for Bruce Springsteen’s E Street Band.

Talking to Howard Stern on how he worked as a bachelorette party stripper: “To enhance our dating lives we thought the thing that would help was to have a hot tub in our living room, so … we figured out how much it would take to buy this indoor kiddie pool, a water heater, and this, that, and the other to sort of simulate an indoor water activity—and then we worked toward that with this extracurricular activity in mind,” he told Howard.

Co-host Robin Quivers saying “You could have Tom Morello come to your bachelorette party?”

“You’re wearing a suit, you knock at the door, ask for a cup of sugar, ‘Brick House’ comes on the stereo—it wasn’t awesome,” he recalled “We were just making a certain amount of money to get that horrible hot tub in our place. Then we did. Then we retired.”

Tom Morello on that time he played with Ozzy Osbourne and Slash: “We kind of slink around to the back of the stage so now we’re sitting behind the amplifiers … waiting for him to play the song,” Tom remembered, along with the frantic crew member who tried to get their attention. “There’s this guy … gesticulating wildly … I can’t hear him because it’s super loud.”

On performing and touring with Bruce Springsteen: “With Bruce … you have no idea what the next song is going to be … sometimes he’d change the first song in the set,” he revealed before noting the measures he took to be ready. “Before the tour … I learned 250 songs just to be prepared, you know, for whatever would come and it wasn’t enough. He would take requests from the audience … and it could be a song that’s not by Bruce Springsteen.”

Tom proceeded to praise the E Street Band and his time being a part of it, though the solo artist admitted he didn’t shy from giving Bruce input every now and again. “I like to be in a band of equals or to be a solo project where I’m calling the shots … I could not restrain myself,” he said before recounting a question he asked after visiting original AC/DC frontman Bon Scott’s grave during an Australian tour stop in 2014. “Bruce, do you think that there is somewhere where the intersection of the circle of the E Street Band and the circle of AC/DC overlap?”

It was a suggestion Bruce took to heart. “The next day we rehearse AC/DC’s ‘Highway to Hell’ … one of my favorite concert moments in history,” Tom beamed of an eventual performance.

The Howard Stern Show, which airs on SiriusXM channel Howard 100, is broadcast live Mondays through Wednesdays starting at 7:00 am ET. The full show is also available on the SiriusXM app.

Video clips below courtesy of SiriusXM’s The Howard Stern Show.


Tom Morello Couldn’t Even Play Guitar When He Formed His High School Band; Tom Morello tells Howard Stern that he didn’t know how to play the guitar when he formed his first band in high school and recalls the moment he knew he wanted to be a rock musician: