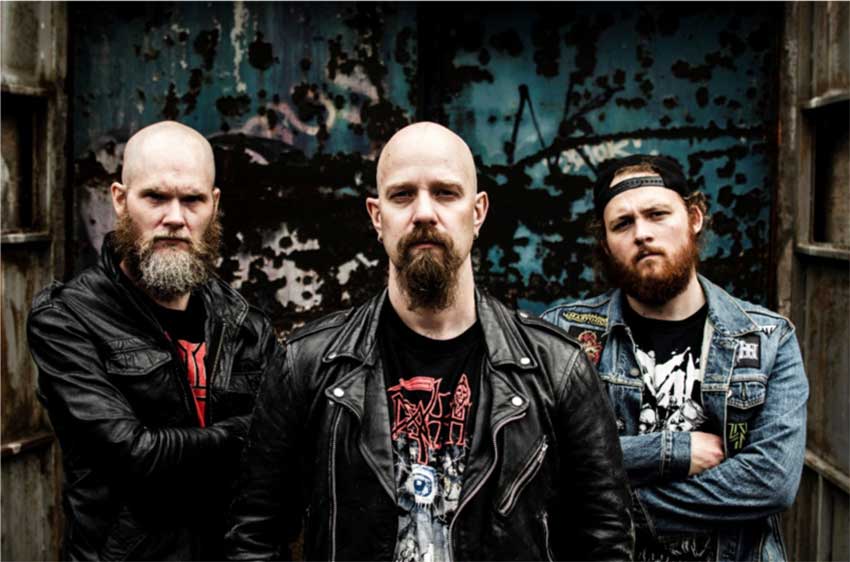 A Thrash-Avalanche is coming your way and its name is WARFECT. Straight from the Swedish underground, it’s time for this trio to unfold their full potential and start the metal machine they hid behind the curtain of being an insider tip in the scene.

Four years have passed since the trio based near Gothenburg released their last record Scavengers, and they won’t hold back fire any longer. WARFECT is ready to sweep the thrash-scene with a brand new album in 2020 that will hit you like an artillery strike.

The three-piece has supported the likes of Lich King, Vulcano or NunSlaughter in support of their albums Exoneration Denied (2013) and Scavengers (2016), and smashed stages at various festivals like SWR Barroselas, Obscene Extreme, In Flammen, Under the Black Sun and many more all over Europe.

WARFECT comments:
“We’re absolutely thrilled to be joining the artillery of Napalm Records and Napalm Events and are looking forward to letting our thrash force spread through-out the world! Now we have a foundation to build our thrash machine upon and together with our friends at Napalm Records we will soon bring you our next piece of violence! The thrash metal future is looking bright and we’re really looking forward to exploring this brave new world and all the possibilities with it! Next up is shooting the first music video for the new album and hopefully the album will hit the market later this year. Booking-wise we’re looking ahead into 2021 and we’re sure we’ll hit a stage near you as soon as possible. Stay forsaken and keep a lookout for further news!”

Napalm Records A&R Sebastian Muench states:
“The first contact with the Swedes WARFECT was a classical A&R moment! A new to me, Thrash Metal band, sent us their new recording along with a brilliant album artwork. It was all it took to convince the entire Napalm Team, that here, a new Thrash Metal masterpiece was born! The band symbolizes everything that makes bands such as Kreator, Sodom or Legion of the Damned legendary! If you need proof, have a listen to the 2016 album release Scavengers and expect even more for the new recording. WARFECT, welcome to the Napalm family!“


After releasing two demos under a different banner, WARFECT came into the world in 2008 and have delivered pure thrash metal ever since. In the past few years, the band toured and played multiple festivals all over Europe. Major music magazines compare WARFECT’s style to genre-giants like Kreator, Slayer and Sodom.
﻿
WARFECT Discography:
Depicting The Macabre – 2009
Exoneration Denied – 2013
Scavengers -2016
TBA – 2020