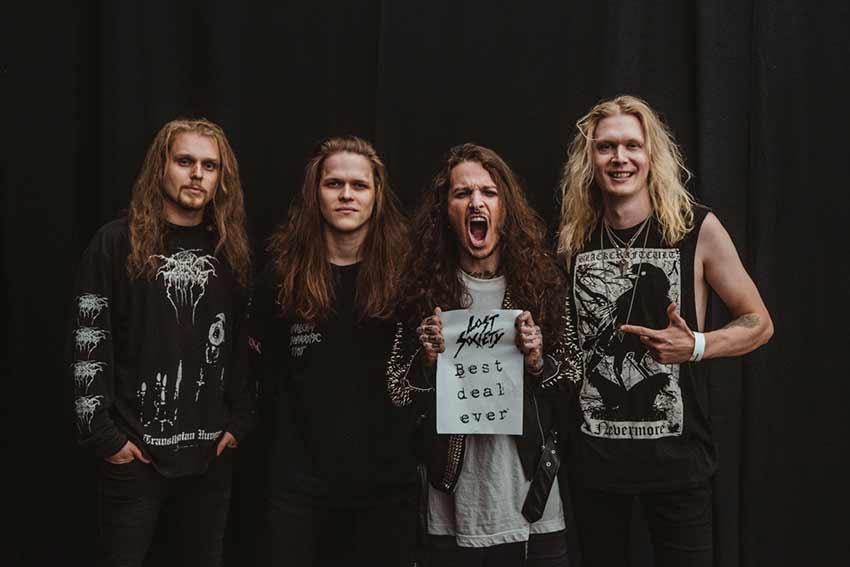 Some alliances are just meant to be and today we can happily announce, that the boys are back!

After a short excursion with their latest album ‘No Absolution,’ the band has manifested their very own sound, combining all the grit that has made them respected in the heavy community.

Nuclear Blast simply could not resist getting them back on their roster and continue the laid-out path for making these four youngsters the contenders for the throne of modern metal made in Finland.

Frontman Samy Elbanna states:
”After the release of our strongest album yet, we are beyond stoked to announce our return to the world’s biggest heavy metal label, Nuclear Blast.

This past year has been all about writing and perfecting the LxSx sound, and we cannot wait to carry out our massive plans for the future together with the titans of the world of metal music.

The next chapter of LOST SOCIETY begins now. Be prepared.”

With four albums in total under their belt and tons of stunning live shows, the band has gathered a dedicated fan base. And whoever has seen those guys live, knows the captivating energy they ignite that makes you wanna bang your head off!

Jens Prueter, Head of A&R Nuclear Blast Europe comments:
“Welcome back LOST SOCIETY! You always meet twice. The Finnish ‘youngstars’ had an amazing start with their first three albums of teenage thrash fury. But I guess it happens at every family that grown-ups want to move out to develop on their own. And that’s what happened to LOST SOCIETY. They redefined their style with the latest self-released album ‘No Absolution’ and found a new, even more successful, direction with a clear vision for greater things to happen. Nuclear Blast Records is more than happy to share their vision and continue working with one of the most promising bands in modern metal. Special thanks to their management team Kristen Mulderig and Jouni ‘Grey Beard’ Markkanen! Let’s raise some hell!”

Gerardo Martinez, General Manager Nuclear Blast USA, adds: “NB is thrilled to see LOST SOCIETY return home after an independent stint. Now, armed with a great team behind them, We cannot wait to see them back in North America, as we are more than ready to embark on a successful career with them!”

The band will hit the studio in autumn, once again with Joonas Parkkonen as a producer. Never change a winning team!