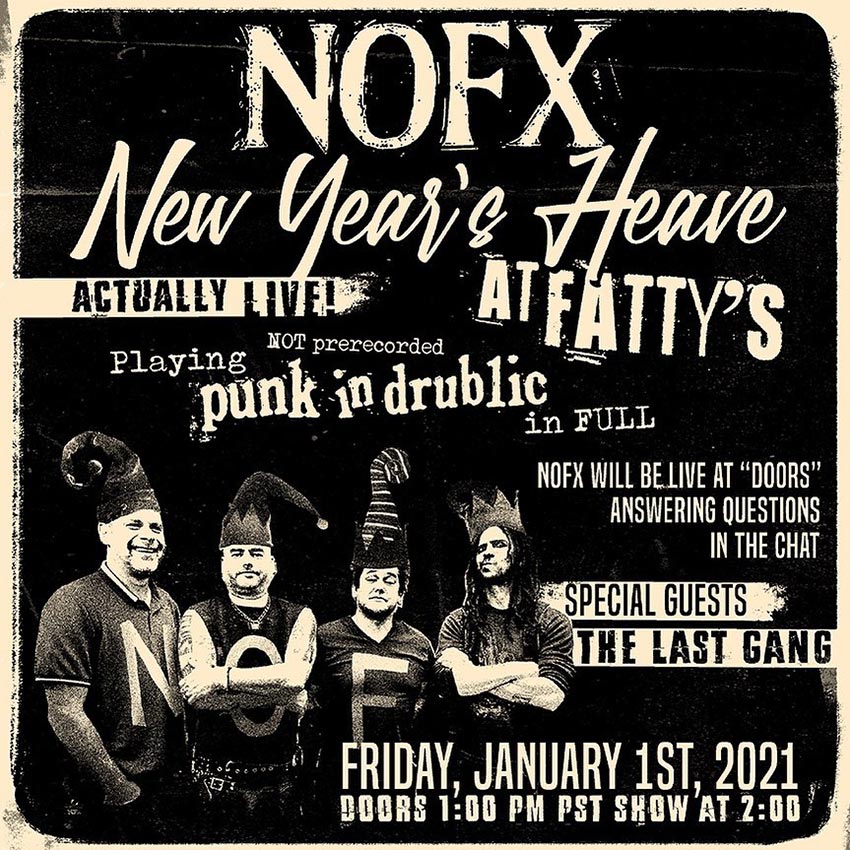 UPDATE: This stream has been postponed, the band say:

Friends. After careful consideration, we have decided to postpone the New Year’s Heave at Fatty’s until it is safe to get people together. We had hoped the COVID-19 numbers would be low enough for us to safely social distance with masks and precaution; however, due to California’s raging numbers, we would be irresponsible to put so many at risk. We’ll announce a makeup date as soon as it’s safe to do so, if you already bought a ticket you will automatically be refunded.
Stay safe, everyone, love NOFX.

LA punk rock giants NOFX have announced plans to throw a New Year’s Day live stream event which will see the band dishing out their 1994 fifth studio album ‘Punk In Drublic’ in full. Going down Friday, January 1, 2021 at 1PM PST, 4PM EST, 21:00 GMT, 22:00 CEST and titled ‘New Year’s Heave at Fatty’s,’ the virtual gig promises to air live and will not be pre-recorded.

In addition, the online hangout will feature special guests The Last Gang and will see NOFX live answering questions in the chat prior to the start of the show (at 1PM). The stream will be available for 72 hours after the event, get tickets ($19.94 no surcharge at check-out) via this location.

If you recall, this past September NOFX live streamed a set that consisted of 1992’s ‘White Trash, Two Heebs, and a Bean’ in full from bassist and lead vocalist Fat Mike’s backyard. Watch that full performance over HERE or below.