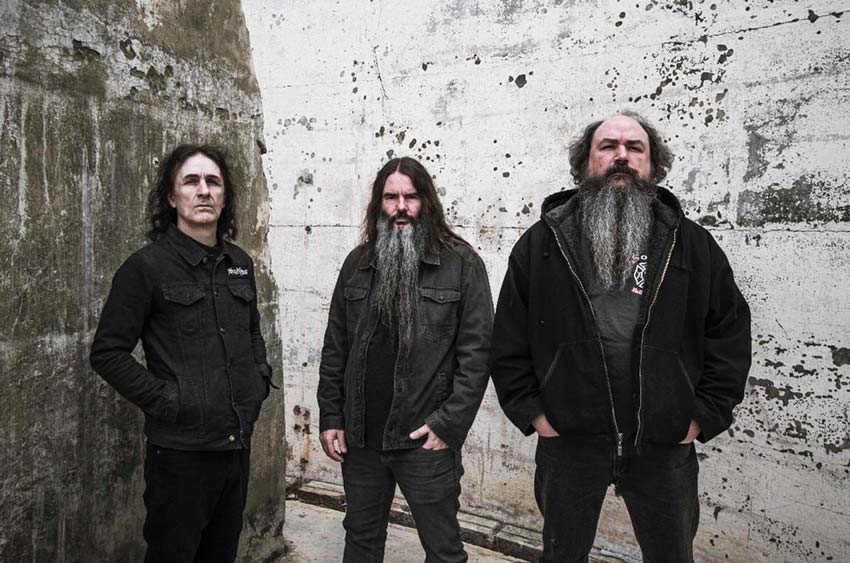 The skies are dark. The atmosphere is thick with dread. The future looks bleak. Only pure, red-blooded heavy fucking metal can save us now. Belching effortlessly classic and crushing anthems from the riffian depths, with all the power and panache of Black Sabbath at their peak, Witchskull return in 2020 to stir our souls once again. Witchskull will release their new album A Driftwood Cross April 24th via Rise Above Records. Pre-order the album on Amazon and iTunes.

Students of monolithic, turbo-charged and fuzzed-out doom will already be familiar with this Australian trio. Erupting into the consciousness of riff worshippers the globe over with 2015’s monumental, self-released debut The Vast Electric Dark, Witchskull instantly revealed themselves as co-opters of metal’s dark history and purveyors of some of the heaviest, grooviest and fiercest metal available to human ears.

After securing a natural home at Rise Above Records, the band’s follow-up album Coven’s Will (2018) briskly upgraded their worldwide profile, securing countless great reviews and generating a ferocious buzz in the underground. With a reputation for heroically thunderous live shows, and an unerring knack for writing the kind of riffs that cause structural damage to buildings, Witchskull hit the road in support of their sophomore opus, very much with the wind in their sails.

Every band claims that their new album is bigger, bolder and badder than its predecessors, but Witchskull could hardly say anything else about their third full-length A Driftwood Cross. With a sound that marries the very best imaginable doomy and fuzzy tones with Olympian levels of sonic punch and truly sizzling ensemble performances, the Aussies’ third album sounds colossal and proudly rooted in the old school, but timeless and tenacious, too. From fiery, propulsive rippers like opener Black Cathedrals and the lithe, snappy Baphomet’s Child through to more languorous, lumbering fare like The Red Altar and the warped mysticism of the closing title track, it’s a dazzling blend of the primal and the cerebral: a tour-de-force of atavistic finesse, fit for any age.

Recorded with Jason Fuller (Blood Duster) manning the controls, A Driftwood Cross … has all the energy and rough edges of a spontaneous, DIY recording, but with tons of sonic heft and substance to back up those glorious riffs. Fuller’s greatest contribution has been to draw the very best out of Jason, Tony and Marcus, resulting in a record that crackles and throbs with belligerence and bravado.

In keeping with the ominous, occult vibes that oozed from 2018’s Coven’s Will, the new Witchskull album takes a similarly dark and dastardly thematic path, taking in the shadowy menace of Black Cathedrals, the overt devilry of Baphomet’s Child and nature’s slow motion revenge in the crushing March Of Winter. Defying the blank-eyed conformity of much modern heavy music, these are songs borne of curiosity and imagination, via a profound belief in the power of the story.

Eight neck-threatening explosions from the pitch-black Sabbathian hearts of three diehard artisan riff-makers, A Driftwood Cross places Witchskull firmly at the forefront of the amorphous scene they emerged from. With burgeoning mortal threats looming over us all, the only path to salvation is through the sound of distorted guitars and tectonic rumble. Heavy music for heavy times. Suddenly, the future looks a little brighter.