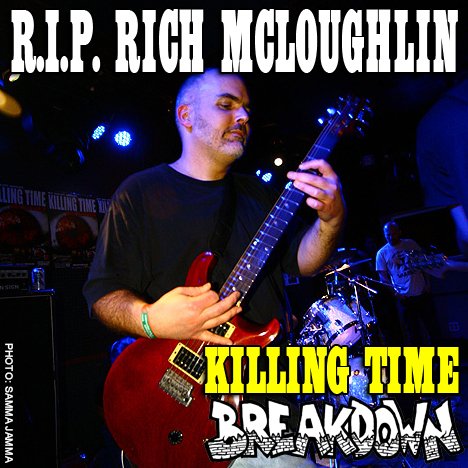 Rich McLoughlin – known best for his time in NYHC acts Killing Time (even back when they were Raw Deal) and Breakdown – has died. News of his death began circulating social media earlier this morning, though no actual cause of death has been reported.

“He was a pure musical talent and a complete pleasure to talk to anytime our paths crossed,” tweeted Dead City Records regarding McLoughlin’s passing. “His riffs/music will live on as some of the most classic NYHC songs ever!”

No Compromise’s Owen Thomas said, “Thank you for your music, supporting No Compromise and for being one of the nicest friends I’ve had. I’ll never forget the times I saw you live and how much I loved it. Rest In Peace brother. NYHC.”

Matthew Zaleski of Edgewood Records stated, “Breakdown and Killing Time has written some of the hardest music ever. If you don’t like them you’re not into hardcore. R.I.P. Rich McLoughlin, thanks for being an inspiration.”

FYA Fest’s official account posted, “Getting to have Breakdown and Killing Time be part of the fest in the last few years is something that will always mean a lot to me, rip Rich Mcloughlin.”

Live music archivist hate5six expressed his feelings, “It pains me to hear Rich McLoughlin has passed away. Killing Time. Breakdown. Raw Deal. I always appreciated you making time to talk to me at shows. Everything from filming to politics and just life. This is devastating for so many.”

Derek from Frontside shared, “I had the fortune to open for Breakdown and I got to catch Killing Time at a BNB Bowl almost 2 years back. Rich McLoughlin had some of the sickest basslines in hardcore and always had an influence on how I played bass. RIP and thank you.”

Combust wrote, “RIP Rich McLoughlin of Breakdown/ Killing Time. NYHC legend. Killing Time is one of our biggest influences. A huge loss for the HC community.”

And, of course, the outpouring of love for Rich goes on and on, RIP.