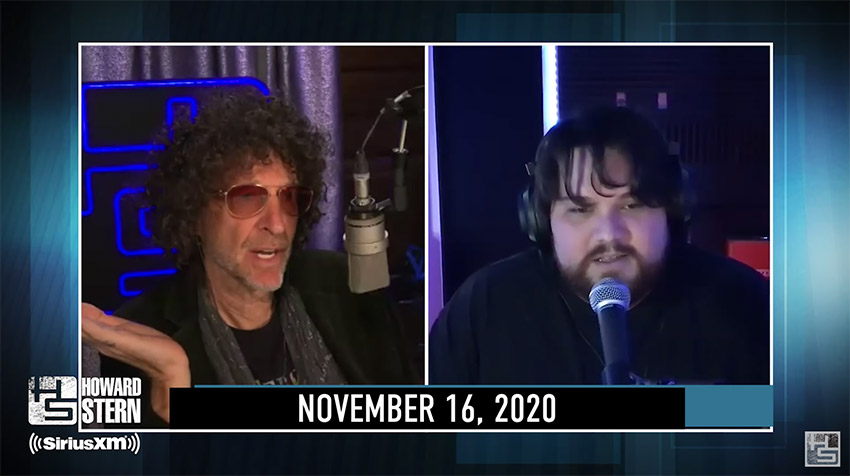 Wolfgang Van Halen joined Howard Stern for a heartfelt conversation Monday morning, making his debut on The Howard Stern Show on SiriusXM just over a month after the death of his father, rock icon Eddie Van Halen.

The sit down with Howard Stern marked the first interview Wolf Van Halen has given since Eddie’s passing and he didn’t shy away from speaking candidly about his dad’s battle with cancer, their conversations during his final days, and the epic Van Halen reunion tour which never materialized. He cleared up several rumors about Van Halen’s future and Eddie’s music archives, too, while also premiering “Distance,” an emotional tribute song Wolfgang had recorded as a farewell to his father.

Throughout their conversation, Howard Stern wondered what’s next for Van Halen, with Wolfgang assuring Howard he had no intention of taking his father’s place as the band’s guitarist. Those were shoes he was simply unwilling to fill. “That’s fucking stupid,” Wolfgang said of the rumors. “You can’t have Van Halen without Eddie Van Halen. I’m not my dad. I’m not going to replace him,” he said. “I’ve spent my life making sure I’m not like him and I’m my own person,” he continued, explaining his father—were he alive—would instead encourage him to pursue his own ambitions. “He’d be like, ‘What the fuck are you doing? Go do your own shit!’” In my opinion, outside of maybe a tribute show at some point down the line and archival releases further down the line, it’s done,” he said. “I don’t have a dad anymore and I’m coming to terms with that,” he continued. “So, I think fans can come to the terms with the fact that we’re not going to have Van Halen anymore. The music is going to live on forever but you can’t continue without Eddie Van Halen.”

Additionally, Wolfgang took a few minutes to assure Howard and his listeners that previous rumors of a massive Van Halen reunion tour were indeed true. “[They] were very real. Since 2015, I’d been talking with Dad and was introducing the idea … I would be like ‘Hey dad, you know what would be cool? Hear me out … what if I opened for you guys and we had Mike [Anthony] come back?” he said. “As time went on, he warmed up to the idea. I got him excited about it,” he continued. “At a certain point, it turned into what we joked was the ‘Kitchen Sink Tour’ because after he was okay with that arrangement it was like, fuck, then let’s get Dave [Lee Roth] and [Sammy] Hagar and even [Gary] Cherone and let’s just do a giant, fucking awesome thing.”

On coping with the loss of his father: “I’m awful. It’s terrible. Every day, man. Some days are better than others,” Wolfgang told Howard Monday morning. “The pain is still there always, but you just kind of figure out how to carry it a little better as time goes on. But it’s always gonna hurt.”

On having a close relationship with his father and their musical bond: “That’s the gift and the curse of it,” Wolfgang responded. “We had such a close connection and now, for the rest of my life, there’s no way I’ll never be able to think about him no matter what I do—which is good but also hurts a lot.”

On his song Distance: “There are a bunch of other ideas that are just sitting there and waiting to be finished. ‘Distance was one of those,” Wolfgang said. “When this happened I was like, ‘Let’s finish it and put it out for dad.’”

The Howard Stern Show, which airs on SiriusXM channel Howard 100, is broadcast live Mondays through Wednesdays starting at 7:00 am ET. The full show is also available on demand. Stream three video clips below (courtesy of SiriusXM’s The Howard Stern Show).

Wolfgang Reveals There Was a Van Halen Reunion in the Works Before Eddie Died; Wolf Van Halen confirms the Van Halen reunion rumors were true while talking with Howard Stern.


Wolfgang Van Halen on Writing “Distance” as a Tribute to His Father; Wolf Van Halen speaks openly about missing his father, Eddie Van Halen, and debuts the emotional tribute song he wrote for him.


Wolfgang Van Halen on the Rumors He’ll Replace His Dad in Van Halen; Wolf Van Halen dispels the rumor that he will replace his father as the lead guitarist in Van Halen.


Wolfgang Van Halen on Waiting to Go Through His Dad’s Unreleased Music: