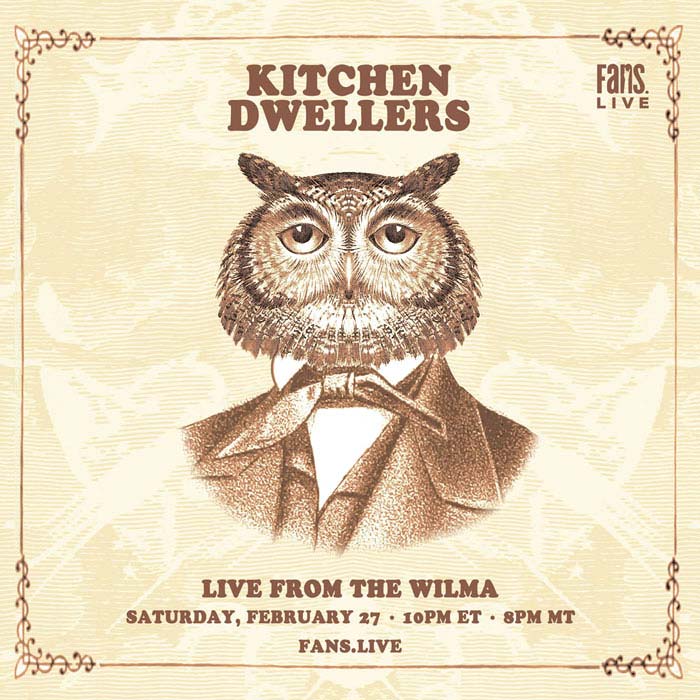 Psychedelic bluegrass band from Bozeman, Montana, Kitchen Dwellers have announced a special live streaming event that will air from their local venue, The Wilma, this Saturday, February 27th at 10PM EST / 8PM MT.

Being filmed and directed by Goedde Light and Sound, the stream is accessible via Fans.live, with tickets going for 15 bucks. Fans can expect to experience two full 90-minute sets.

“The Wilma is one of those amazing venues where awesome things just tend to happen,” stated banjo player Torrin Daniel. “Something about the vibe in that room just tends to encourage musicians to throw down in any and all ways possible. It’s a staple venue of Montana, so it’s a place we’ve all been going to and attending shows since our early days as a band in college – a venue we have a history with. We’ve also been working on a lot of new music lately and are eager to start getting things out to people, so we’ve got a couple special things planned for the night. This stream is something we’re all very excited about.“

Regarding how the band started, bassist and vocalist Joe Funk previously commented, “This all started as a series of jam sessions in the kitchen. We were getting together to play covers and traditional music and old-time tunes for fun after school, and everything else just evolved from there.”